“The phone will be popularly priced at under Rs 500… this event and launch stands as a true testimony of success of the latest initiatives taken by the Government of India,” according to a media invite sent by the firm.

At present, smartphones available in the market are priced around Rs 1,500. Last year, DataWind had announced that it is teaming up with Anil Ambani-owned Reliance Communications (RCOM) to launch the world’s most affordable smartphone, priced at Rs 999. The phone is yet to hit the market.

Established last year, Ringing Bells will start with the assembly of handsets in Phase-I and aims at full indigenous development of the feature-rich smartphones, it said.

It did not disclose any other details about manufacturing, products and pricing.

A new entrant in the Indian mobile phone market, Ringing Bells had launched one of India’s cheapest 4G smartphone at Rs 2,999, recently. It has launched two other feature phones in the market.

India, one of the fastest growing smartphone markets globally, is poised to overtake the US as the second-largest market in next few years.

In the last few months, global smartphone makers, including the likes of Xiaomi, Motorola and Gionee have commenced assembling their handsets in India, where the government is pushing local manufacturing through its Make in India initiative.

Freedom 251 Android smartphone Online Booking will go live on February 18, 2016 in their website freedom251.com starting at 6 AM in the morning and will be available for booking online only for the earliest customers before the stocks last.

Freedom 251 by Ringing Bells will go for pre-order sale online as well as through offline mobile stores present across India from February 18th at 6AM. Freedom 251 also boasts to have over 650 service centers across India to support their customers on any issues they encounter with their Android smartphone device. 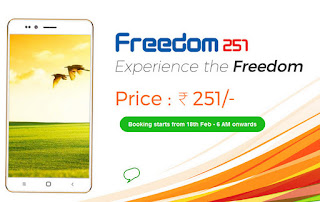